She Performs - Studio Visit and Article 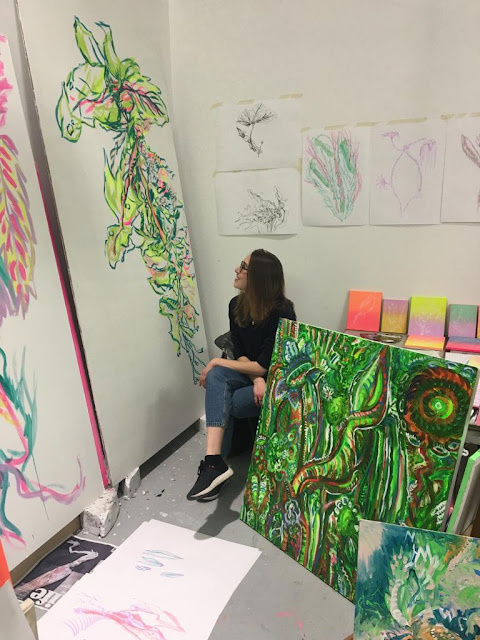 The canvases are filled with plants, in toxic and seductive colours – both pulling me in and pushing me away at the very same time. Images of plants and non-plants and every permutation within that range tumble on the canvas. Her work is all about the potential of nature. Post human. Not apocalyptic. We talk a lot about genetic modification, growth and possibilities of nature and evolutionary flows. The works are based on research - thorough and extensive (you can definitely feel the Goldsmiths MA). It’s hard and at times upsetting, Anna tells me. Her research needs to be going all the way. She reads about everything from the seed to the extinction of species. She soaks it all up, like a sponge only to later release it in a powerful, unconscious cry of reclaiming the female body. The weeds perform themselves and take on forms that Anna no longer has any control over.


Material Feminisms is lying on her desk. Anna suggests an understanding and empowering of the materiality and ‘aliveness’ of the human body within, and of, the natural world - acknowledging Nature as a multitude of living subjects with agency, emphasising interconnectedness and symbiosis. Anna suggests a kind of recasting of nature as potential feminist space - a reversal of the historical association of women, and the female body, to nature as object or as a site to be controlled. Anna’s body becomes vessel for many ideas about biology, feminism and post-human theories and in an unconscious, performative act... the plants manifest themselves on the canvas. It’s about her synthesising how to bring about an aliveness to the plants. The plants appear as the actors, rather than becoming more passive. What Anna masterfully achieves in her works is the merging of the conscious and the subconscious, the real and the unreal, the human and vegetation.

While Realm of the Superweeds brilliantly occupies small and mid-sized canvases, her latest works have blown up in size. The plants didn’t have enough space it seems so they took on bigger grounds. It’s no longer about the environment in which these superweeds could grow and the potential of taking over whole worlds, but it’s about the species itself becoming entwined in the notion of post human and all its genetic possibilities. The mushroom like species that is currently taking form on the larger-than-human canvas again seduces with its colors. Even though there is something inherently toxic and potentially dangerous about the neon colors and its mere size it draws me closer with amazement and curiosity.

But like all her works, it is still an expression of her body and the gestural subconscious. The work shifts between control and lack of control: capitalism and nature. 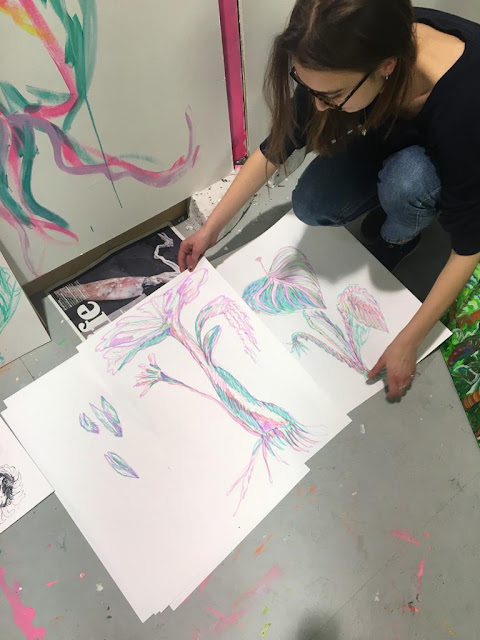