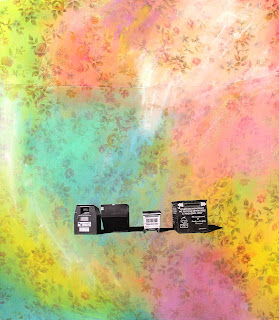 Anna Garrett presents two brand new works, an installation and sight specific sculpture, in solo show glitter. garden. garbage.
Failure and Moths iv combine notions of the deconstructed painting and painting as object, in addition to referencing Anna’s previous body of collage paintings: Ruin Lust. The pieces are broken yet seductive: Anna’s work suggests how ruin, garbage and the overlooked could reveal ‘truth’ within contemporary consumer culture.
The works question what a painting could be, blurring the boundaries between art and garbage. In Failures, the ruins of past paintings are hand-stitched unevenly, revealing the structure, stripping back the illusory window to the bones of the painting. Almost a ‘means of laying bare a truth buried beneath layers of false romantic aesthetics.’1 Failures appears to be ‘unfinished’, touching the moment of near completion but sinking back into ruin.


Painterly, glittery and fluorescent, the abject surfaces are fragmented by ruinous urban collage. The push and pull allures to the seductive toxicity of consumer culture and its reality. Ruin Lust consists of painted emulations of a digitalised tropical sunset, often floral or with signs of the ‘paradise’ image linked to tourism; then broken by garbage, raw objects stripped of mystification.
1. Walter Benjamin, as quoted by Naomi Stead, 2003